The Defence Science and Technology Laboratory (DSTL)—a British Ministry of Defence (MoD) agency begun in 1993—develops and oversees testing standards for the protective waistcoats used by law enforcement agencies in the U.K. These standards include evaluation procedures for rating the ability of waistcoats to protect primarily the upper body from attack by knives, spikes, and bullets. While ministerial responsibility for the standards resides with the Minister for Defence Procurement, much has been done in practice and in a technical sense to develop test procedures that better correspond to end-user deployment scenarios.

In 2018, the Centre for Applied Science and Technology (CAST) was officially integrated into the MoD’s DSTL. From that time forward, CAST has been the key interface between Britain’s Home Office ministers and policy makers, frontline partners, and science-and-technology suppliers.

CAST operates from several locations in England. They are London (2MS), Harperley Hall, Sandridge, and Langhurst. The latter two have dedicated facilities.

A major CAST undertaking early on was to hold a series of stakeholder consultations for purposes of producing a testing standard that would better meet end-user needs—the primary need being to reduce waistcoat wearer risk of death or serious injury from ballistic attack or stab assault to the upper body.

From these efforts ultimately emerged the following CAST assessment procedures:

The normal process for obtaining certification begins when the manufacturer sends to CAST samples of the protective products along with an accompanying declaration and all associated technical documentation. CAST then reviews the submitted documents and determines whether they meet the requirements for certification testing. If accepted, CAST then authorises one of its accredited facilities to commence testing.

Provisions exist within the standard to accommodate unusual situations, such as when a manufacturer finds need during production to make a protective panel that exceeds by more than 5% the coverage area specified in the submitted technical documentation (in this situation, the manufacturer would first consult CAST for advice).

In exceptional cases, CAST may provisionally approve armour for testing prior to full acceptance of the technical documentation and declaration—but it’s the responsibility of the manufacturer to justify why CAST should issue a provisional approval. Regardless, the certification process can’t be completed until CAST has fully accepted the manufacturer’s submitted documentation.

Afterward, the designated test facility sends its findings to CAST which then conducts its own independent review of the results. If the test was successful and CAST’s reviewers are satisfied, CAST will then issue a certificate to the manufacturer. The certificate details the test results and includes relevant information about the performance of the armour.

That’s not the end of it, though. Upon certification, the manufacturer must send to CAST a sealed mid-sample of the certified armour.

Regardless of whether or not the superstructures are produced, samples must be tested according to the PQT within the certificate period (usually two years) at an accredited test facility. The sample must be the same cut and size as the one submitted for initial certification in order to ensure consistency of production quality.

The table below shows five levels of protection (plus one special level) and the number of panels specified in each for certification testing according to the requirements. Note that for ballistic testing at protection levels HO3, HO4, and SG1 the panels can be put through their paces as standalone products or in conjunction with HO1 or HO2 panels that already have been assessed and accordingly certified. 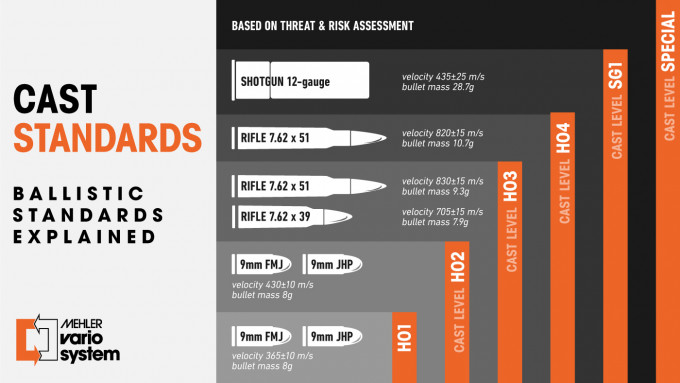 The protection levels listed in this table are defined as minimums. Based on the threat and risk assessment, the need to use additional ammunition can be done either in addition to any level of protection or (for specific uses) as a standalone special level of protection.

THE MEANING OF PROTECTION CLASS HO1

THE MEANING OF PROTECTION CLASS HO2

THE MEANING OF PROTECTION CLASS HO3

THE MEANING OF PROTECTION CLASS HO4

THE MEANING OF PROTECTION CLASS SG1

CAST—PROTECTION IN ALMOST ANY THREAT SITUATION

Satisfaction of the CAST guidelines (in other words, attainment of certification) serves as a quality assurance stamp that lets occupational-use waistcoat wearers know their risk of death or serious injury from a gunshot or a stabbing attack to the upper body is reduced.

All our protective vests can be equipped with CAST protective elements.

The most important protection is inserted in the vest cover. It is as individual as its wearer. In order to be best prepared for everyday police and military life, it is crucial to choose the right protection class.VPAM is one of the most represented standards in ballistic protection, especially in Europe.