Your head is arguably the most exposed—and therefore most vulnerable—part of your body when bullets are flying. In response to that reality, numerous manufacturers of ballistic-protection products have developed technologically advanced helmets to keep your head safe in danger-filled situations. The challenge for you then becomes choosing a helmet that's right for the missions you undertake. It’s a challenge because there are so many different categories of helmets now available. Each comes with its own set of design and performance characteristics to meet various ballistics standards. This blog post discusses modern ballistic helmets, how they're made, what the standards are that they must meet, and how they're tested to demonstrate that they measure up to those standards.

THE NEW-AGE BALLISTIC HELMET - A MISSION-CRITICAL PIECE OF EQUIPMENT

The main purpose of a ballistic helmet is of course protection—protection against potential threats that occur in military or police operations. These threats include bullets of course, but also splinters, shrapnel, blunt blows, falls, and impacts. The choice of material used in a ballistic helmet can influence the protective effect of that headgear. So can the material’s thickness, the design of the helmet, as well as its interior fittings (including strapping).

However, these days there is increased usage of specialised equipment, such as hearing protection and communications systems, night-vision devices, and respiratory protection. Consequently, a combat helmet’s role is no longer just to protect, but also to serve as a platform that must be capable of accommodating and smartly integrating additional mission-critical equipment.

As with all protective equipment, comfort is a very important factor. The operator must be comfortable wearing the helmet for a protracted time without experiencing fatigue in order to carry out dynamic operations. This is why it’s crucial that a helmet’s interior include personal adjustment options to ensure it will be comfortable enough for daily use and extended operations.

THE MOST-USED MATERIALS FOR BALLISTIC HELMETS

Ballistic helmets come in different types. These types can be defined based on the choice of material used in the manufacture of the helmets.

Helmets made of Polyethylene and Aramid

Helmets made of polyethylene and aramid fibres offer high-level, low-weight protection against fragments and explosions. A downside is that impact from bullets deforms the material considerably, a development that can result in fatal injuries.

In addition, the protective surface of aramid helmets is smaller, as projectiles are only stopped at a greater distance from the edge. Nonetheless, this type of helmet is particularly suitable for military personnel exposed to threats of explosions and fragments, and in need of a lightweight helmet that can be worn for a stretch of time lasting several hours.

Helmets made of titanium and a combination of titanium with aramid or polyethylene deform only slightly when struck by a bullet, and are bulletproof even along the periphery. Therefore, they offer a large surface of effective protection against bullets.

There are many reasons why titanium helmets are currently seen as the best ballistic helmets on the market. Here are the most important ones:

The helmet shell is bullet-resistant up to 10mm from the edge for all variants (in effect then, over 90% of the helmet surface is protective). By contrast, the protective surface of aramid helmets can be as little as 50%. For the same-surface ballistic helmets made of aramid, this is from 50-100%.

Helmets made of titanium provide superior protection against the residual energy transmitted by projectiles. According to the German Technical Guideline (TR), the 10-joules maximum residual energy value is well below the guideline’s 25-joules maximum permissible value and reaches only a fraction of the values usual for aramid helmets (which transmit approximately 60 to 120 joules for the same caliber ((9x19)). This value of aramid helmets usually corresponds to fatal injuries.

So, the hybrid helmets are often used by police and special forces units as they combine lower weight with higher protection as well as the best characteristics of both: titanium and aramid or polyethylene.

Helmet categories have evolved over the years. These are the categories as they currently exist: 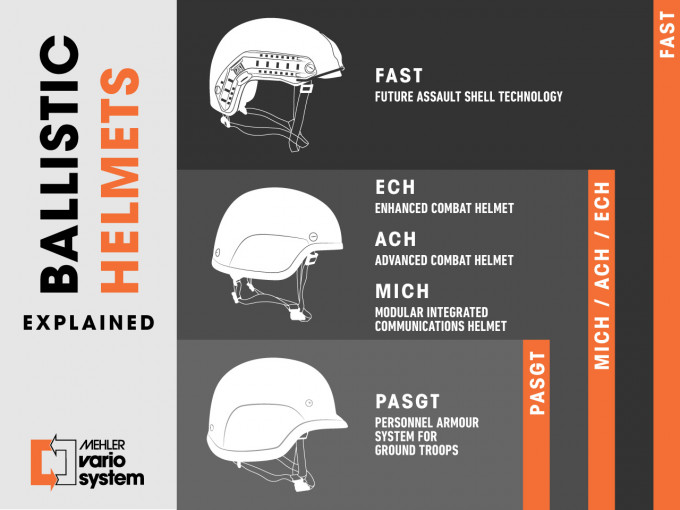 This helmet category has existed since 2010. PASGT helmets are made of layers of Kevlar fibres and as such are sometimes called “K-Pot” or “Kevlar” helmets. They are used by the military from time to time.

Helmets in this category provide less protection but have the advantages of being lighter weight, comfortable, and highly compatibility with accessories such as night-vision devices and ballistic visors. Advanced Kevlar fibres are used to produce MICH helmets, which are actually an improved version of PASGT helmets. MICH helmets are popular a favourite of law enforcement and military units worldwide. Depending on protection requirements, MICH helmets are available in a choice of cut designs (baseline “full cut,” “high cut,” and “gunfighter cut”).

ACH helmets are shaped like those in the MICH category, but with one notable difference: their ramp at the forehead has been removed. This alteration improves the wearer’s ability to see upward and to mount night-vision devices. Consequently, ACH helmets are considered a step above MICH types.

Modern ECH helmets weigh less than their predecessors owing to their use of ultra-high-molecular-weight polyethylene. In addition, they provide greater protection against fragmentation and rifle projectiles. ECH helmets were designed as a replacement for currently used combat helmets.

FAST combat helmets are widely used by special forces and law enforcement units. Helmets in this category are characterised by a shell design cut high above the ears, which allows for easier integration with communication headsets, lights, and cameras. FAST helmets are made of polyethylene to endow them with lightness. Primarily in Germany, FAST helmets are offered with modular extensions—attachable armour plates, for instance.

According to the Technical Guideline (TR), ballistic helmets must meet several requirements to ensure helmet safety. First, helmets must be chemical repellent in order to be deemed functional. Second, the materials used to produce the helmet must be flame retardant and shock absorbant. Third, ballistic helmets must not have sharp or protruding edges that can cause injury to the wearer.

To prove that ballistic helmets meet these requirements, they must undergo extensive testing. The testing is structured to verify helmet performance under the severest of operational conditions. One of the standards utilised for testing is that which was developed by the National Institute of Justice (NIJ).

According to the NIJ, ballistic helmets are divided into three types based on their performance level:

A ballistic helmet must provide protection against standard test rounds and lesser threats such as 12-gauge No. 4 lead shot and most handgun rounds in calibres 25 and 32.

A ballistic helmet must provide protection against the standard test rounds and lesser threats such as 12-gauge 00 buckshot, 45-calibre Automatic, 22-calibre Long Rifle High-Velocity, 38 Special, and some other factory loads in calibre 357 Magnum and 9mm, in addition to the threats in Level I.

A ballistic helmet must protect against most factory handgun loads in calibres 9mm and 357 Magnum in addition to lesser threats such as 12-gauge 00 buckshot, 45-calibre Automatic, 22-caliber Long Rifle High-Velocity, and High-Velocity 38 Special.

There is also a Level III-A, but it is not included in the official NIJ standard. Even so, Level III-A represents the current benchmark for ballistic helmets used by military and special forces.

Level III-A provides greater protection than level II and against most factory handgun loads in the calibres 44 Magnum, 9mm, and 357 Magnum, as well as against lesser threats. However, Level III-A helmets deliver in addition increased protection from projectile impacts, which are increasingly common in modern combat environments. 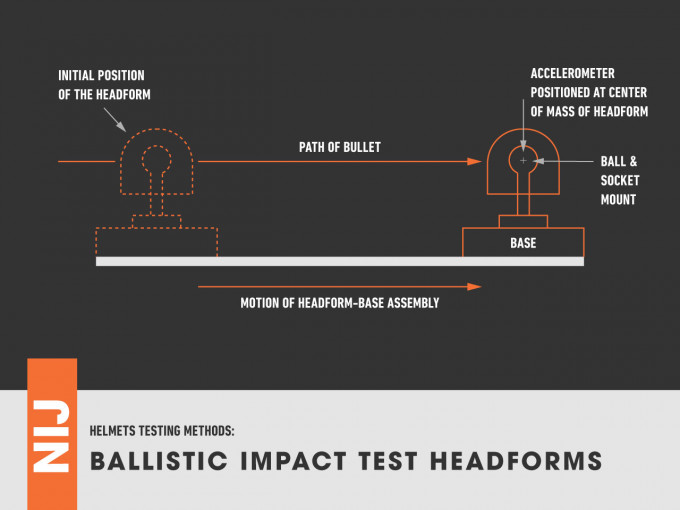 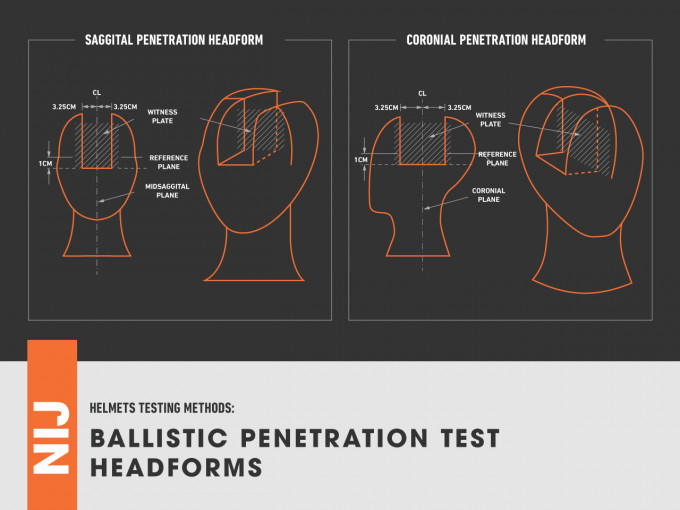 You can read more about the NIJ standards and test methods in our blog article "Ballistic protection levels explained–NIJ".

When it comes to ballistic helmet standards, a crucial criterion distinguishing NIJ 0106.01 from VPAM HVN 2009 is that of deformation. VPAM measures it, while NIJ does not.

These are the testing requirements spelled out under VPAM HVN 2009:

For the first test*, five hits need to be positioned on one helmet. The hits must be evenly distributed on the surface. A further hit shall be positioned anywhere, 20 + 5 mm from the edge and at least 80 mm from a hit already made.

For the second test**, two hits each are to be positioned on two helmets with complete interior equipment at arbitrary positions in order to determine the residual energy.

*Test 1: helmet is to be fastened by means of a rigid device in such a way that it cannot be detached from the holding device by the firing.

In recent years, increased requirements have led to the emergence of ballistic helmet categories PASGT, MICH, ACH, ECH, and FAST. Regardless of category, ballistic helmets are made of either polyethylene and aramid, titanium, or a mix of titanium and aramid. The choice of material used depends on the particular protection requirements the helmet is intended to fulfill. Before they find their way onto the heads of military and law enforcement operators, ballistic helmets undergo extensive testing to verify that they will perform as promised. Tests are conducted under conditions ranging from routine to extremely severe. Standards employed in these tests are NIJ 0106.01 and VPAM HVN 2009.

The most important protection is inserted in the vest cover. It is as individual as its wearer. In order to be best prepared for everyday police and military life, it is crucial to choose the right protection class. Berufsalltag (SEK, Polizei, Militär) zu sein ist die richtige Schutzklasse entscheidend.

VPAM is one of the most represented standards in ballistic protection, especially in Europe.